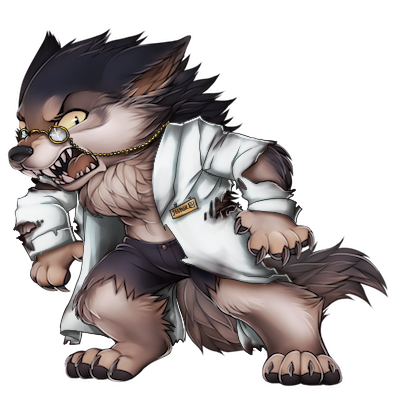 Jesper is infected with Vampirism. Symptoms include craving blood, sensitivity to sunlight, an allergy to garlic, and changing into a bat after especially forceful sneezes. If they start to sparkle, immediately consume a Golden Apple to cure the infection.


Afflicted with lycanthropy from an early age, Jesper has always struggled with his sanity. Back then, he opted to lock himself away more often than not, always teetering on the edge of mental break after mental break. This level of suffering left Jesper desperately wishing for a solution, whether it was temporary or permanent. For a time, this meant letting the beast run wild. He hurt others this way, but he would feel more sturdy and wouldn't be in constant pain.

A wandering wolf priest who specializes in herbal medicine happened upon the forest Jesper had secluded himself within, showing no fear when the beast stood before him. Instead, he merely smiled and offered Jesper an herbal remedy. Desperate and half-shocked by the wolf's reaction, he took the vial and downed it. Almost instantly, he could think clearly for the first time in what felt like an eternity. The interloper, still smiling, gave a nod and introduced himself as the priest, Nanook.

While it was not a permanent solution and Jesper's mind began to fog a again a short while later, Nanook provided him with the motivation and the direction needed to go on. This encounter, coupled with the struggle with his incurable darkness within led the wolf to become an alchemist. Nanook mentored the beast, aiding him in tempering his own severely lacking discipline. The priest, having sealed the soul of an ancient evil within him, understood all too well the hold darkness can have.

After some time working on his mind and his skills with potions, Jesper entered Olde Foxbury a new man and began creating potions for its people whom he once terrorized. All the while, the profits allow him to produce the pricey potions that keep his mind steady.