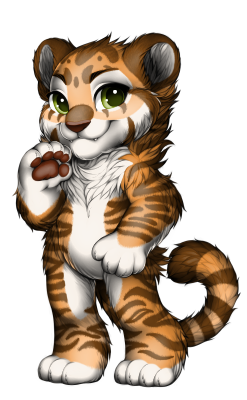 Personality:
Dependable//Humorous//Easygoing//Friendly
Siberius is a tiger that everyone in this little village depends on, both for his blacksmithing skills and as a warrior. Although he is one of the larger and more powerful big cats here, he never seems to take up too much space or intimidate because of his laid-back attitude. He might seem like a mis-match with his fiesty life-mate Namir (both in size and temperment) but their differences often compliment each other. He can frequently be seen carrying the smaller feline around, much to Namir's supposed irritation.

Appearance: This tiger doesn't put too much stock in outer trappings, and worn comfortable garments suit him best when he bothers to cover his fur. Though he has been known to dress up a little for his life-mate.