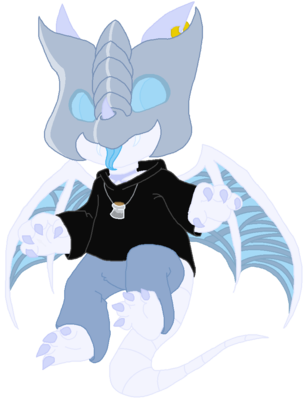 Originally, Aen hated his undead state, believing it to be a curse that he hadn't deserved. He had been good his entire life, never done any wrong as far as he knew, so why was he now cursed to roam the ground for all eternity instead of going up to the Dragon's Heaven like all other good dragons and dragonesses did? In truth, some sort of necromancer stole this happy afterlife away from Aenlestrasz by bringing him back to life.

For many years after his resurrection, he wandered in a state of self-loathing and loathing in general, doing anything he could to die again, even if it meant not going to the Dragon's Heaven. A deer found him one day, staying by his side, and the two fell so deeply in love that it was much, much more than platonic, more than romantic. Aen pledged himself to the deer, his Jin, until death did them part. Jin taught Aen many things, including how to love - both others and himself - once more.

Unfortunately, that death came far sooner than either expected when Jin was murdered. Aenlestrasz had once again lost the only thing that made him consider himself alive.

Now he simply wanders Dragonsmaw Manor, helping with odd jobs as he finds them in a somewhat vain search for something to soothe the aching in his core.
Aenlestrasz is made up of mostly bone, with sinew and tendons so he can move, along with magic and a mask-like faceplate to cover up most of his skull. He generally covers up his ribcage with a hoodie - either sleeveless (to let his bony arms show) or long-sleeved - in an attempt to hide his glowing core.

Ever-present with the bone dragon is a small jar of ashes around his neck on a chain. While he'll never disclose it himself, there's rumor that those ashes are those of his beloved brother Jin.
~~~~~~~~~~~♥~~~~~~~~~~
Paintie by snowfallen
All comments from Aenlestrasz are IN-CHARACTER.