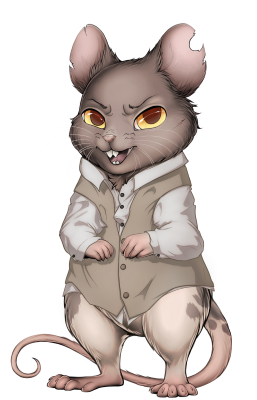 "Our environments shape the way we see ourselves. If you have been condemned to live in an area that is pretty evidently a rat-run, then sooner or later you're gonna come to the conclusion that you're a rat."
-Alan Moore

History
Baldor spent a fair bit of his youth struggling with his identity; those around him informed that a rat surely couldn't do any good in the world, that they were underhanded and sleezy, and yet he could not understand where their logic was coming from. His parents were incredibly poor, there was no way around that, but they were always the honest sort. Simple small-time farmers who never stole or even wished ill will upon anyone. And they wanted great things for Baldor, having named him in honor of a great god of peace, forgiveness and love. They knew their son would changes minds.

However, being a catalyst for changing his fellow Olde Foxbury citizens' minds on the validity of a good rat was a heavy burden to carry. It was never so much what he did or didn't do, but what everyone else was convinced he did. Specifically, he found himself abiding by the law but also was often the first to be blamed for anything that ever went amiss. The young rat was just an easy target on which to pass the blame. And likewise, Baldor slowly began to find it was easier to not even defend himself. Their evidence was circumstantial at best and often absolutely baseless. But....it did start making dark ideas churn in the young rat's head. If he were to, in typical self-fulfilling prophecy style, just give the people what they wanted, be the schemer everyone believed he was. Only...he vowed to do it better.

The rat started small at first, picking pockets and shoplifting. For a moment, he felt bad about it, but those feelings quickly waned, especially when he began forming bonds with members of the "underground" - those types who made ends meet through means which were not exactly legal. They all had their own reasons for doing what they did, and this settled well with Baldor somehow, made him feel less alone in the dark as it were.

While it took no time for Baldor to quickly nestle himself in the pits of Olde Foxbury's underworld, it took even less time for the rat to realize how inefficient everything was. A thief with no knowledge of cracking vault codes would try to pull off a big heist. And the thief would do this alone, even though he knew a guy who could pick vault locks in mere moments. This was something Baldor saw and heard about time and time again. The sheer amount of disorder coupled with underutilized resources and connections irritated Baldor more than a little bit. In the end, it was clear that what the village's most wanted needed someone to manage them.

Baldor seemed the most likely candidate to be up for the task as no one was quite as organized and thoughtful. While he could pick pockets or pick a lock, he was much better at picking individuals better suited to such tasks. Just as he did when first entering the Olde Foxbury's underbelly, he started small, assisting in some smaller jobs so his fellow criminals could see how much better things could go if crime was a bit more.....organized. Quickly, he was well-received and revered for his devious plots.

Using his connections and past successes, Baldor put together a sort of mob. Successful heists, "sensitive" merchandise exchanges and all manner of shady dealings were quickly on the rise as members were given access to not only their own skill sets, but the skill sets of every other willing member of Baldor's mob. And, at the top of it all, Baldor oversaw dealings as their leader, a kingpin of rat-like caliber.