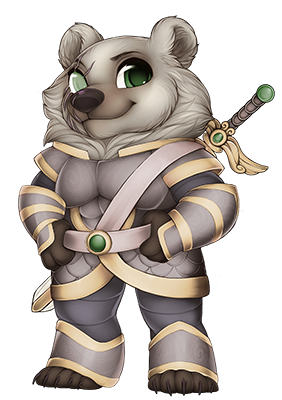 General Information
If ever one needs to reach a destination seemingly impossible to go to, it is Bjarte's guide service that might be of assistance. The large hybrid bear has dedicated his life to traversing and mapping out all of the roads less travelled, hoping that, with his help, less lives of adventurers will be lost. For the longest time, he completed his travels alone, save for when he was guiding others. However, upon gaining more notoriety, some interesting characters began traveling with Bjarte from time to time. This usually would be when he was near their village of origin doing some scouting. The variety that comes from his travelling companions really has made the road ahead much more enjoyable and a whole lot less quiet.

There is a certain darker tone to the journeys that he has endured. While travelling with individuals from all walks of life across vast areas, it's almost inevitable that Bjarte would encounter....a few unpleasantries. He's seen folks at their worst, but this has never halted his determination, only made him a bit more jaded toward the world. There is good out there, and well-intended people, just fewer than he originally would have hoped.

History
The son of a knight, Bjarte was expected to follow in his father's footsteps. And, while he did become a knight, as was intended from the beginning, Bjarte refused to be tied down to one place. He sought adventure and intrigue, as well as the opportunity to make a genuine impact in service of others. As such, the bear quickly found himself under the role of knight-errant. His journeying was not for glory, but to see the world around him and help wherever needed.

During his travels, Bjarte found himself mapping the area, determining the fastest and safest paths to reach his destination. This made any quests that led him far and away a much easier task, making him capable of retracing his steps simple. It was because of this that the grolar bear found himself guiding lost travelers more often than not. Eventually, folks would pay good money just to have Bjarte take them from point A, to point B safely.

Guiding the lost became a clear honorable quest for Bjarte and he has thus dedicated many years to it. Eventually, he gathered something of a small caravan who all for their own reasons chose to stay by his side. This was never a permanent commitment for any of those who chose to journey with Bjarte, but the company and the possible teaching moments were welcome in the eyes of the knight-errant.