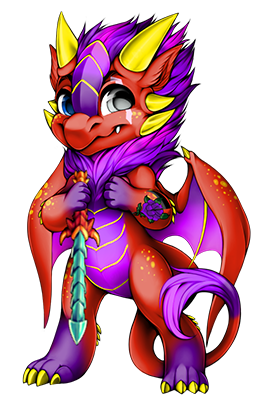 The town of Silverflecked Village is at peace, a stark contrast to the events of that morning, which is what you can here from all the chatter of the residents of the village as they stroll about. They speak of a large monster attack that had just occurred that morning, and they are lucky none of the more dangerous monsters managed to get through into the village. You can hear them mostly praising Rain for her quick thinking and actions, while they speak more disdainfully of the village warrior. Listening closely, you can catch the specific things they are saying.

"Thank goodness Rain was there to put an end to attack, or else we might have had to join in!" a jungle colored velociraptor sneered to a snowy owl gryphon. "That village warrior can just be so scatterbrained sometime, I'm not surprised he isn't dead!" The gryphon lightly hit the velociraptor on the arm. "Don't speak about Slash like that!" she retaliates. "He's just confused about who he is. He's a great warrior, that's for sure, but he feels as if he could be something more. Most dragons go through a period where they want to be the best they can be, and anything less is unacceptable, and Slash is no different! Companionship and people who like him to protect is mainly the cure-I mean, look at him and Rain! They're best friends, and even though she has a lot of responsibilities so they can't hang out as often, he's pledged his undying loyalty to her and got a tattoo to show it, among other things! Rain has never had this problem, protecting a village who respects her instead of a select few, but Slash never had that chance. So just... give him some time, will you?"

The velociraptor mutters something along the likes of "Since when did you learn so much about dragons?" but nothing else, and the two continue on their way. You shake your head, deciding that you've done enough eavesdropping for the day, but you can't help but wonder who they're talking about. As you continue your walk, you begin to hear peculiar sounds in the distance, those of swords clashing and loud, resonating thunks. Intrigued, you decide to follow the sounds. You turn the corner of a building and find yourself staring into a large clearing, where multiple training dummies have been set up. In the middle is a mostly red dragon, who is seemingly immersed in training. He hops around, using his wings to gain aerial leverage, and holds swords in both paws and his tail. He swings at the dummies, using expert footwork to maneuver himself around the field, never missing a beat. So you stand and stare at him, and then he turns to you.

Upon finally noticing you, Slash lost focus on what he was doing and his gathered momentum nearly sent him crashing into the ground. He managed to catch himself on a training dummy, having dropped all but one of his swords. Gathering up his remaining confidence, he began to make his way towards you, a somewhat embarrassed smile on his face as he kept tripping over his feet. This was quite the difference from the confident and almost elegant dragon who had been 'fighting' the training dummies. When he finally reaches you, his voice is a mix of curiosity and nervousness. "H-hello there!" he greets. "I-I'm Slash, the village warrior! I was training because, w-well, um, I didn't do my best in a recent attack and I wanted to improve my skills. My embarrassing little slip up there was because you caught me a bit off guard-not that that's your fault-but I can assure you that I am doing my best to make sure that I can keep everyone here, especially visitors like you, safe during the time stayed at Silverflecked Village!" The dragon is obviously embarrassed, even more knowing that you've probably heard about his failure that morning. He is obviously blaming himself, and seems to be desperate in making sure he seems capable of being the village warrior. Even though most spoke down of him, all in all, he really doesn't seem like too bad of a guy... perhaps he's just a little misunderstood?

Slash is the only one if the warrior career in Silverflecked Village, for while Rain is quite adept at fighting, Slash is the one who mainly fights the monsters and loots his kills. He does not fight other villagers, having sworn to Rain he would protect her village from the mindless beasts the prowl in the forests surrounding it, but under the understanding that he could not fight another villager as he could not bring himself to do so for reasons of his own. He never risks attacking another villager because he cannot understand their ways, being very confused about himself already, and leaves that to Rain because-as a leader-she is more adept at reading other villagers. Slash also uses fighting monsters to clear his head, because inside he is very confused with no notion of what to do with his life. He is mostly selfless, but in periods of time where he is trapped in his own mind and ruminating about how he could better himself and remain so that he is never useless to those who need him, he is ironically selfish. Rain says it comes with being a dragon, and that in time good companionship will help him find himself.

Slash is a hopeless romantic who can and will do just about anything to find his true love. He named himself Slash, feeling that a fearsome name along with good skills in combat against monsters would make him appear more suitable. His two biggest secrets are his Truename and his past. His Truename is the name most dragons are given when they are born, and is the core of the dragon itself as the bearer of it's identity. Slash's past is also a mystery, one only shared with Rain. He believes that if either secret ever gets out, it would ruin him. Thus, he avoids alcohol, drugs, and other mind-numbing substances like the plague, and is always very careful with his words, lest he slip up. On the outside, he's a confident fighter, but on the inside, he's a nervous wreck. Brominating on all possible failures, Slash believes that finding someone who loves him for who he is will help him ease his worries. And thus, the circle continues.

As a pastime, Slash also loves collecting swords and has currently procured the dragon tail, elaborate, and steel swords, also looking for the coral sword. And despite being best at fighting, he is also a suitable crafter and tailor.