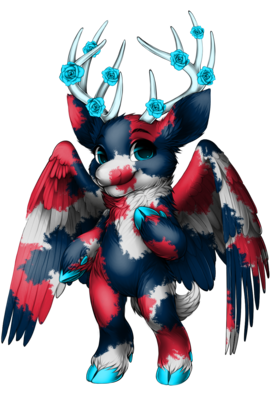 Relationship Status: Single and Open (if she trusts you that is)
The tape recorder lies in the middle of that empty, barren room. It's small, with a few square buttons like teeth and a small compartment for the tape. It seems simple enough, there are only a few buttons after all, and they are all labeled. You press one, and a robotic voice meets you.

"H-hello, can anybody hear me? My name is [DATA RETRACTED] and I have no idea where I am. I-I was at a party in this one village a l-little ways away from Dragonsmaw Manor, when I met a curious and somewhat f-frightening fellow-I b-believe his name was [DATA RETRACTED]? W-we talked for a bit, a-and he seemed nice enough, but that smile... I left earlier than I had originally p-planned, without letting my friends know that I was l-leaving. S-suddenly, a blue mist engulfed me, and I c-could feel myself start to grow drowsy. I-I tried to run off, but my hooves were like concrete. I eventually fell asleep, and woke up here. I-I seem to be in some kind of [DATA RETRACTED], and the sounds from the outside make me think I'm n-near a [DATE RETRACTED] or [DATA RETRACTED]..."

Of course, why not?

"Hi again, if anyone finds this... he came back last night, the one who I met at the party. That smile of his still unsettles me, especially with those sharp teeth. He came through a secret entrance I hadn't seen in the dimness of the room, and nearly scared me half to death. I thought I would have to fight him, but he didn't come after me. He placed a large tray of food on the middle of the floor, and I thought of escaping, but I was too afraid. And then he just.... left, without even saying a word. I tried to ignore the food and drinks, but I was too hungry. I ate it all without bothering to think if it was poisonous. So far, it's been a while I'm not dead yet, but my head is staring to hurt..."

"The pain in my head has worsened by far, and I've gotten noticeably weaker. I feel like if I put to much pressure on my bones, especially on my skull, they will snap and shatter. There was definitely something in that food... but what? This entry is a bit shorter, I'm afraid, but I need to save my breath. It's getting harder to breath."

You found yourself continuing on before that stupid robot voice could say anything.

"There is something coming out of my head. The ends are pointed, but the rest is smooth. I want a mirror, but I'm terrified at the thought of what I might see."

The next three entries are only labored breathing...

"I have horns. With flowers growing out of them. HORNS. I'm a FEMALE, last time I checked. And how do I know there are flowers? Well, I can't exactly see them, but he can. He came again, left the food in the middle and strolled right over to me and reached a clawed hand towards my face. I tried to duck, but he didn't go for the eyes like I had suspected. I just felt a bit of pressure on my new horns, then a pin-prick of pain and a tiny snap, and his he was holding a bright blue flower. And he spoke this time, too. He said, and I quote: 'This might be what she needs. It's her favorite color, and perhaps it will help her in her studies, no?' That's what he said, and then he left, flower in hand. This dude is crazy."

The next two entries are muffled voices that seem to be arguing. One is the frantic voice heard in all the entries, and the other is calm and smooth to a frightening extent... creepy.

"Oh my gosh oh my gosh oh my gosh oh my gosh oh my gosh. I have wings. Wings. WINGS. I don't think I've told you what happened yet, so I'll just sum it up. When he came back after he took the flower, he said that she had accepted the flower, but 'didn't love him yet'. He said he would have to present her with a better gift than just a simple reagent, something that would advance her studies by far. I decided to stand up for myself, and we argued for a bit. When he frowns, no, SNEERS... it's terrifying. This went on until he finally had enough and STABBED ME WITH A FREAKING NEEDLE. After that... I was in so much pain. I couldn't even move, because my back would let out a screech of agony if I even tried. He would inject me with something to dull my pain every once and awhile, and I was able to fall asleep for a little bit. When I finally recovered, well, I had wings. He took a sample of my blood, in which I was too weak to fight back, and then left."

"This is the last entry, would you like to continue?"

Hesitation. And then the last entry was playing.

"I hope I never see him again. He's knocked out on the floor right now, so I think I have some time to make this final entry. I know he could wake up at any moment, but... it just feels right to record this. When he came back for the last time, oh, he was angry. And beat up, too. Burns and gashes and tiny little scratches and bite marks. He said he had presented her with my blood, the blood of a new species so that she could make the first morphing potion of a winged deer. That he would love for her to continue his experiments with him... on me. Said he loved her, and would do whatever she wanted if she just loved him back. She didn't believe him at first, he told me, but he managed to convince her, and so she attacked him. Good for her, I say, although he doesn't seem to feel the same. He angrily roared that she had called him a crazy monster, among other things that I will not name, and told him that she never wanted to see him again. So she used every tool and harmful potion in her lab, along with her own claws and teeth, to drive him out of her house. After he told me all this, he said I was to come with him and convince her to love him again. He was hurt, and the door was open, so I retaliated. My wings were stronger than I thought, horns sharper, hooves together. I managed to knock him out, and now here we are. I don't how long I've been gone, or if anyone even remembers me, but I have to escape. Maybe Rain will take me in, she seems to like those with troubled pasts... and monsters, for that matter. Anyways, it's been a longh and tough journey, but I am [DATA RETRACTED]-no, that was my old name. I am CENTAUREA now, and I have won. Goodbye."

Elsewhere, a winged dear sits upon a stone, gazing up at the moon. Her vibrant blue eyes are as bright as the beautiful flowers blooming from her shining horns, and her wings are spread magnificently. These parts of her are beautiful and new, and yet the deer is not sure if she likes them. With a sigh, she stands, letting the wind run through her soft fur and feathers. "There's no going back now," she murmurs. "But perhaps... I can start something new?" And with that, she silently takes into the night sky, unbothered by anything that might bid her ill.
~~~

Centaurea is, to her credit, suspicious of any newcomers she might meet to say the least. She tends to keep to herself, and while she was very outgoing and kind to any and all she met before she underwent her transformation, now she is aloof and untrusting. If one approaches her too quickly, or acts rash with no warning, Centaurea will strike out to do as much damage as possible before retreating to the skies. However, if you do manage to get on her good side, you will find she is a loyal friend who will remain by your side even in the toughest of times, and do her best to defend you.

When Centaurea first approached Rain after her transformation, the reaper dragon barely recognized the deer that now bore wings and horns. Centaurea recounted her story, and asked for help building a new life, for now she had nowhere left to go since she had been missing for so long. Rain sympathized with the deer, and promised she would do everything in her power to help her out. And so while Rain personally took the task of finding who had attacked Centaurea, she enlisted other villagers in Silverflecked Village to help as well. Silver took the liberty of building Centaurea a new house, with Hedwig furnishing it, while Galaxy Kritter decided to look through his old party loggings to see if he could track down Centaurea's long lost friends. And though he hasn't found anything, not even a home in which Centaurea can return to, the winged dear is pretty happy staying in Silverflecked Village. Despite the unruly location, she feels safe here in her warm house and beautiful décor, because now, if she is ever attacked again. she has many new friends-and a loyal leader-who will do whatever it takes to track her down and save her once more.