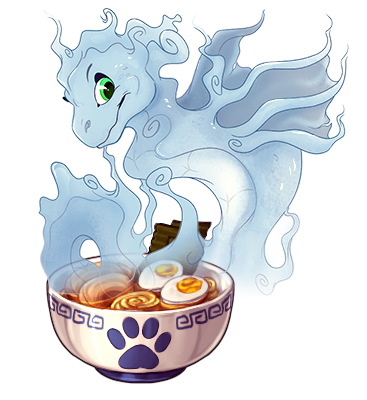 
The circumstances of Lao Mang Lone's creation are ambiguous at best: some assume he simply attained sentience from staying out so long his soup base spoiled, some assume he's the result of an alchemist being allowed into a kitchen not meant for alchemy.
They're right with the second one; Morrigan was curious, and it resulted in the W.I.P. Lao Mang Lone Soup to come alive.
Lao works at Latte Love as the resident chef, with the assistance of Harvey who acts as his hands and taste-tester. Because Lao can't exactly pick things up on his own, being made of steam.
~~~~~~~~~~~♥~~~~~~~~~~~
All comments from Lao are in-character!
~~~~~~~~~~~♥~~~~~~~~~~
Lao Mang Lone's Relationships
Significant Other: None; available.

Chocolat: Chocolat is Lao's coworker and superior in Latte Love. Despite having respect for him as a superior, Lao and the canine do not get along well.
Casey: Lao does not like Casey, finding him to be too sweet and peppy for his liking. While they are civil in the workplace, Lao does not make any attempts to be nice outside it.
~~~~~~~~~~~♥~~~~~~~~~~
Theme song: TBA
Voice reference: Chase Young (Xiaolin Showdown)