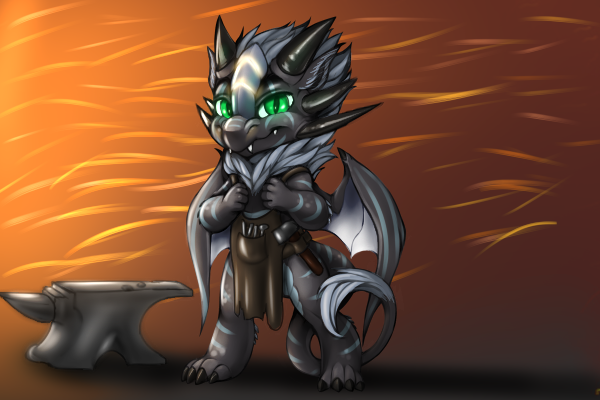 " If a customer is particularly rude, I engrave some hidden profanities in their equipment. That'll teach 'em.


Mr. Shinyscales Junior is the son of a renowned warrior-smith. His father, who battled against some ancient world-domination hungry dragon in far northern lands, was at home both in the battlefield and at the forge. Junior, however, is only at home in the latter. He has a chronic fear of, well, dying in some forsaken forest or dark ancient ruin so he has set his personal focus on forging armor and weapons for others who are less afraid of dying horrible deaths in forsaken forests and dark ancient ruins. He is passionate about his job, and his fire-breathing ability guarantees his forge is always ready for new projects!

While it may take years to be as good as his father ever was, he is set to one day outdo his father at the forge, for in the battlefield he will never achieve that.

He himself is a calm, friendly dragon, if not a little short tempered like his father. This temper works wonders when you need to strike a particularly stubborn piece of metal into shape. Sometimes ridiculed for his rather peculiar name, he still carries it with pride. And if someone is too obnoxious with their insults, he can always breathe fire on them (short temper!!!)! Another notable feature is his somewhat odd sense of humor and the urge to tell bad jokes, usually ones he has already told before. To top it off, he always laughs at his jokes, no matter how bad they are. None can question his skill at the forge, however, as he is already capable of making the most keenest and toughest of weapons and armor there is, being one of the most prestigious blacksmiths in the Dragonsmaw manor.

Luckily for him, he has managed to keep himself busy with work, slowly honing his skills. A lot of that work is thanks to Lady Faralyn and Margador , both of whom have become more of a regular customers to him. Any excess weaponry and armor he can make while not repairing the equipment of the previously mentioned duo, he lets his friend Snektar Von Slithersteen sell for a nice profit, while also letting the gentlesnake provide him with all the raw materials he could ever need.

He currently has banned Kheg , the obnoxious velociraptor, from his workshop, There are a few reasons:
1. Kheg constantly asks how long it will take to finish whatever Mr.Shinyscales is working on.
2. Kheg once set the workshop on fire.
3. Kheg touches ALL of the tools and leaves them at random places.