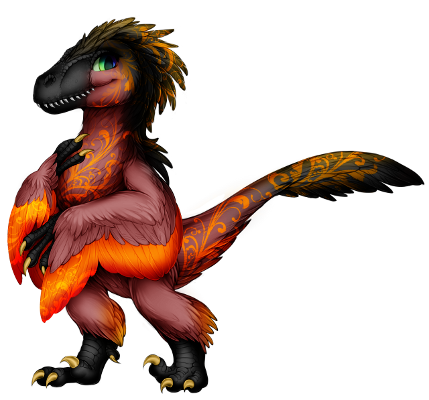 Adorned in intricate golds and reds, Pranavi's beauty brings a new life with it everywhere she goes, which is convenient, given that she's quite dead inside.

With no true goal in life, Pranavi rarely finds herself getting excited over anything. Her voice in effeminate yet monotonous, and can seemingly summon storm clouds on the brightest of days. Having grown up with strict and emotionless parents, freedom is not something Pranavi is familiar with, yet it's not something she craves either. She is both content and miserable with her current position in life.

Pranavi isn't completely void of emotion though, and she has a love for dancing, dressing herself in traditional Indian saris, and drawing intricate henna designs on the hands of herself and her friends. Pranavi embraces her Indian heritage and takes pride in her nationality, though isn't blind to its 'flaws'. As the ex-pack leader is also of Indian heritage, he and Pranavi frequently enjoy complaining about the struggles of growing up in an Indian family. It's among the few times that Pranavi can express her emotions outside of dancing.

Pranavi is also quite submissive. After long and careful consideration, she'll try once to get things her way, but she only needs to be told "no" once in order to give up. As she matures, Pranavi is becoming more assertive, though this change is not happening quickly.

Like other members of the pack, Pranavi is very depressed and, at times, is borderline suicidal. Whether or not she has the courage to, no one is willing to push her far enough to find out. Pranavi does find comfort in talking about her worries with other pack members, as many of them face the same problems, though it is unknown whether or not any recovery is being made.

Much like how Raji learns from his own depression, Pranavi uses knowledge gained from her experiences to teach and assist others. She is the pack Therapist, and cares deeply for the mental health of those close to her.

While outside of her comfort zone, Pranavi has taken up a career in Construction work. She believes that, as well as bettering her skills in working independently, it will potentially help her depression, as building homes will give her a sense of purpose and her contribution of houses to the pack will benefit the lives of others.