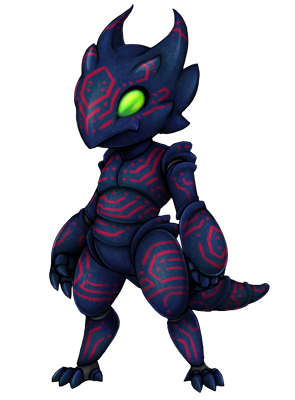 Xeth came from Spiral Mountains, the birthplace of Mineral Demons. He is particularly interested in honing his magical abilities, so he trained to be a warrior. Over time, he felt a desire for adventure. He didn't want to stay too long in his birthplace, but he didn't know how to satisfy this due to Mineral Demons not being able to stray far from Spiral Mountains unless pacted with another being. He was then hired as a guard in a small village near Spiral Mountains. It's not much of an adventure, but it will do for now. There, he became partners with Pyxus.

They did their job well, until outlaws ravaged the village and destroyed everything. Pyxus and Xeth ran away, but Xeth was getting weak for being too far from Spiral Mountains. They decided to pact with each other, becoming partners for life.

Now, they live in Quetzal Palace, once again as guards, but more dedicated in their job. Xeth really loves this place and hopes to explore everything about it.

His markings used to be white, but turned red when he pacted with Pyxus. His markings glow whenever he uses magic. Pacted with Pyxus. Secretly loves him. A bit reserved, usually only shows emotions near Pyxus. When he does show emotions, he becomes eccentric and usually overreacts with anything.