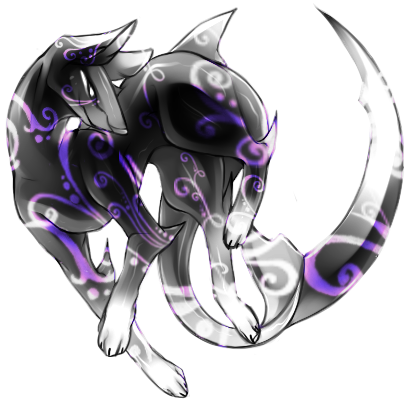 Nenet is a half-breed of sorts and it shows both in her appearance and mind. Though she has none of Lion father's fluff, she has inherited a bright pattern from him, though it has turned more into swirls than lines. The markings glow softly in darkness, although Nenet can dim them at will some and food she eats also affects brightness of the pattern.

Fast and agile, she is a great hunter - but for Phantom hunters, she is too bright in the dark depths where most of them reside and for Lion hunters she looks too odd. So, more often than not, Nenet is left on her own. It is not that she could not spend time with her family, but she desires to find a place and life with her own paws.

Most of Nenet's misfortunes come from the fact she is highly awkward when it comes to interacting with other Katts. She always means well, but it rarely comes across as such. Most deem her sharp and even haughty, judging by her direct, curt responses. Her humor sense does not help, too, for picks on everyone - including herself.

To make it even worse, her playfulness comes out in typical Phantom manner - she loves to spook others, jumping out from well chosen hiding places. In perfect world, it would end up in playful chase, so she keeps swimming after her victims when they flee, only deepening the fear.

By now, Nenet has accepted she does not 'mesh' well with other Katts and decided to do little good she can while staying hidden - after all, it's a thing she's good at. Often, she'll leave small toys or food, even medicine for other Katts to find and watch them receive it from shadows. It brings her a bit of peace and happiness.

Recently, she has befriended a strange, metallic fish - she believes it comes from the two-legs but now has escaped into the vast ocean. At first, she was disturbed by it and tried to chase it away, but its persistence won Nenet over and now they can be hardly separated.