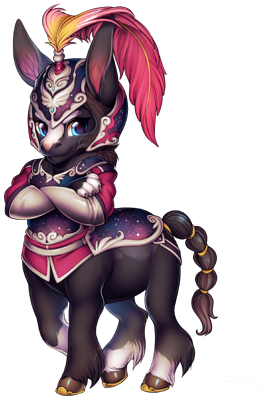 Though Buck is blind, you'd never know it. He has an unnatural connection to nature and animals that seems almost magical. Rumor has it that he can "see" through the eyes of wild animals. Given how capable he is at catching and taming them, maybe it's true. Now that Kodama has joined the band and appointed himself as Buck's "eyes," he is even more capable.

Buck is not ashamed of his disability, but that doesn't stop Faolan from capitalizing on it to play pranks and startle him. He's learned to watch his back when taming an animal if the Gembound is not out exploring or obsessing over Steppe's Ploofball harvests. The zebra thinks she will one day be able to make a medicine that will give the Saggitari back his sight, and while Buck believes that will never happen, he supports her in this task. He has a strong brotherly bond with Tatonka, seeing as how they both have disabilities, and this connection means the world to the black stallion. Moofy looks up to Buck as a big brother, and the Saggitari does his best to help the young mare get over her past torments. He enjoys watching Plume dance, and Tybalt is often following him around, mesmerized at the idea of a six-legged creature. He is, however, a bit unsure of Yukumo.