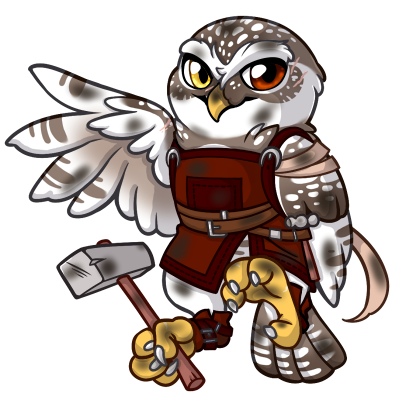 - Artist Notes;
~ He tends to have soot in random places, even if he's not working.

Rein was born to a large, several generational family of blacksmiths who produced high quality gear, both magic and non varieties. He, however, wasn't born with the talent his family was known for, he had to work for his skill. That made his uncles and cousins mock him for being "talentless" compared to the rest of the family who had learned the trade much quicker. Rein didn't let that phase him in the slightest, he saw it was a challenge.

As young Reiner grew, so did his skills leading him to be one of the more sought after smiths out there, but despite his skill he still isn't sitting pretty at the top. So to continually improve his skills, he actively seeks out challenging orders and can be rather picky with them, but he's more than willing to work with folks that need iron to protect their families or themselves by having them work in his forge(Mostly simple tasks) with him to earn the piece.