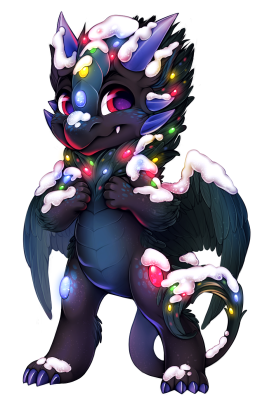 Sent away from his previous home, the nameless antelope looked for a new place to call home. He had forgotten his name a while back, but he missed having villagers who cared about him.
He came upon the Village of Mythos one day when the clouds settled enough for him to climb on.
He walked the clouds, facinated by the resilience, admiring the craftsmanship of the houses. He noticed one house in particular was rather quaint. He walked up to it and looked around, it looked like it had just been finished being built.
"Hello there young cervine..." a low growling voice rumbled from behind him. He turned, spooked almost out of his pelt.

He turned to see a large dragoness, scales shimmering with frost in the late afternoon sun. Wondering how the scales stayed icy, and whether or not he was going to be eaten were rivals for dominant thought.
"H-hello there....pretty ...dragon..lady.."

"Might I ask why you are here? We...rarely get visitors." she grumbled as she tilted her head.

The antelope shivered. "I was sent from my home, and I am looking for a new one....I. .found some neat clouds and followed a path."

The dragon seemed to contemplate this. "Well. Then as the leader of the village, I welcome you to stay with us. What is your name?"

The cervine almost cried, "I know not for I have forgotten long ago."
The dragon sniffed him. "You seem as though this form upsets you too.."
The cervine shouted "This form feels untrue! Like I was meant to be more than this. "

Xanzith nudged him towards a well, almost knocking him in.
"Make your wish by heartsound, then draw water. The answer may find you."

He thought to himself. -heartsound, what an old word...whatever. By the sound of my hearts beat I wish I had the power to become something more than I am...and survive my new home -

He then drew up the pail but what was in the pail was not water, but a plush glowing with magic.
"I have heard of these!" Without pause he grabbed the plush tightly to himself and the magic enveloped him. When he opened his eyes, the plush sat worn and without magic in his claws.
...claws?

He looked at himself. "I am a dragon! But I still have no name!" he cried to the larger frost dragon.

The frost dragon explained. "As you are a dragon, if you wish, I could help name you? My name is Xanzith "

"Yes please" he said, "You have been such help, it would only be perfect if you were to name my new form."

She grumbled to herself, but the new dragon was suddenly not afraid.
"A name has much power. And such your should reflect such. Rhodrolth seems to suit you best. Welcome, and be happy."
He smiled at his new name as he enjoyed the simple furnishings in his home.