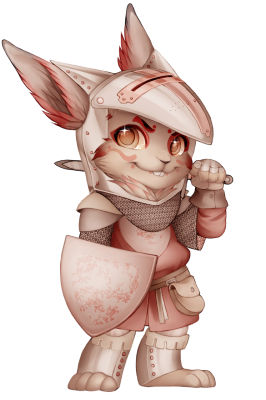 Frappuccino no longer has a house! They will be unable to work. Please replace the house or move Frappuccino into a FC slot.

Inspired by the warriors she met after her family, the Coffee Buns moved to Dragon's Maw Manor, Frappuccino decided to pick up a sword and join the fray!

The most headstrong of the Coffee Buns, she often trains alongside her Wickerbeast companions in order to better herself. Despite her small size in comparison to her fellow warriors, she's quite formidable and terrifying with her weapon, leaving no monster alive in her ferocity.

Frappuccino's only soft spot seems to be her kitsune bun companion, which she loves dearly.