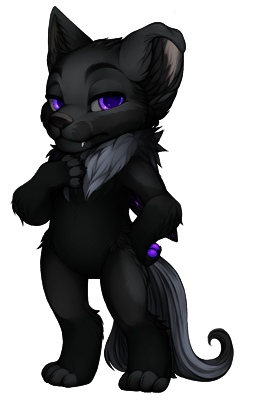 Quill is a grumpy looking Starwalker, He hardly ever smiles and always seems to be in a bad mood, even on his good days. He doesn't speak much but has an amazing sense of right and wrong and is willing to fight if he thinks it's the right thing to do. He likes to keep himself busy, or a least doing something besides sitting and doesn't enjoy his personal space being invaded. It takes a while to get on his good side but once someone is deemed a friend, he becomes an open book. All they have to do is ask. He'll also begin showing his more sassy and teasing side.

Despite his outwardly off-putting and aggressive attitude, he doesn't really enjoy fighting. He'd actually much rather to simply ignore the outside world and settle down with a nice book or go on a hike. His favorite places to go are mountain tops where he can view the stars without the thick haze of Dragonsmaw. As for books, he'll say that he enjoys mysteries and adventure, but he truly loves romance, especially of the tragic sort.

He's very particular about his appearance and hates for his wingettes to be pressed too firmly to his back. He makes sure his mane and tail are always neat and tangle free but doesn't trim either very often. He prefers to let them shed naturally. How I did Quill's profile!