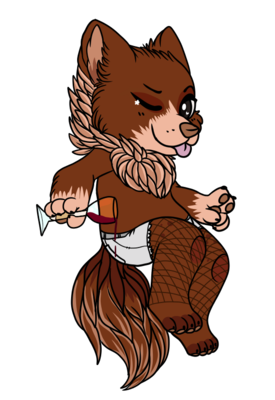 Cardinal is a water demon residing in Chicago. He was originally from the demon's dimension, but escaped the earth after having some run ins with the law (and also Vincent, who now wants to kick his ass to hell & back). He is a very peppy man and enjoys his job as a bartender at Black Chicago. The bar was owned by Argus before being passed on to Cardi and is a hotspot for all things supernatural. The bar was created to be a place where supernatural creatures could chat and chill. Currently, Cardinal works with Vladimir, Cory, Lachi and a few others. He loves his employees to death and will do anything to defend them (which seems to be necessary at least twice a week). In the past, Vlad and Cardi dated, but now they've found other folks. Cardinal has a heavy lisp, and many humans remark it's near-impossible to understand, so he often has to shapeshift to fix the issues with his tongue. He still finds it a bit hard to talk "properly". His demonic, however, is much better as it is a very mushy language. Vlad speculates it's because English is an impossible language to begin with.

As a human, Cardi is 5'4 and has reddish-brown hair going down to his mid-back. It is often tied up or pulled out of the way. He appears to be somewhere between 21-30. Vlad describes him as one with a pretty face and a soft body. He looks gentle, but can pack a punch. As a demon, he is a sentient puddle of water ready to make mischief. Being a puddle of water has its perks, such as being able to fit into small places. The down side is the risk of evaporation.