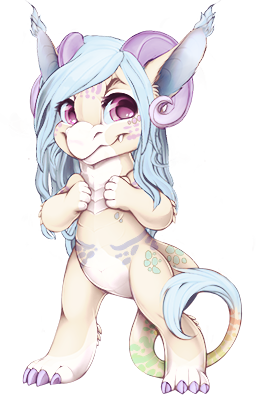 Saphira a wingless dragon, who were shunned because they could not fly and also practised the art of Alchemy, So when they were old enough and had enough of being ridiculed by the dragons who could fly. They left the brood to search for a place to belong until they met Angel (Me) the head doctor of Quetzal Palace in trouble surrounded by monsters and their Warrior hurt, So they came to the rescue instead of fighting the monsters with the sword that the village warrior had troubled they instead threw a vial as it hit the ground it exploded in a ray of colours, resulting the monsters running away in fear, the wingless dragon walked up to the unconscious wolf warrior and gave them a liquid from a vial and it vitalized them to awake from their coma but they still sustained injuries with the Village doctor saved Angel smiled and thanked the gorgeous wingless dragon for their quick thinking and their knowledge of the Alchemic arts and asked Saphira their name they replied and was stunned when Angel offered them a place in Quetzal Palace and help her create potions for the Villages to keep them strong and healthy while she attended to wounds or sickness that cannot be cured by potions. Now Saphira was happy to be among the kind and helpful villages of Quetzal Palace and feel like they truly belonged among them.