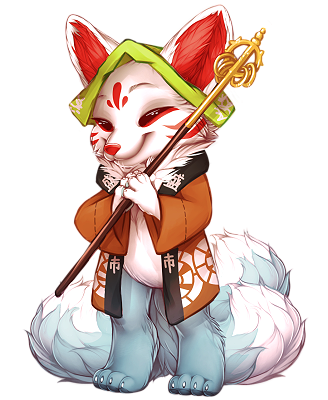 Mitsuishi is a lazy kitsune that hails from Iwate Prefecture, making her home at the shrine in the capital city of Morioka she took her name from. She spends most of her time in the trees napping or in a normal fox form dumpster diving. She's unbeatable at Wanko Soba's eating contest and will never turn down a nice bowl of jajamen or reimen!

Mitsuishi's lackadaisical lifestyle is frequently called into question by her rival from the Ryukyu Islands, Tomimori the shisa. Tomimori thinks that shrine guardianship is a position one must take seriously. Mitsuishi thinks he needs to chillax.

The kitsune and the shisa may bicker like frenemies, but one must wonder if there's something a little more between the two.

[ Mitsuishi is dedicated to the city of Morioka, Iwate-ken, Japan. My home for half a year. ]