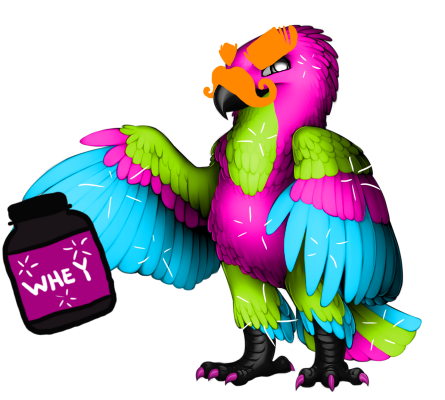 THE MAN no longer has a house! They will be unable to work. Please replace the house or move THE MAN into a FC slot.

The oldest menber of the HOT PINK HUSKY RAPTOR SQUAD claims he has no name but his group name - for his squad combined is MOAR MASCULINE than just himself. The (br)others all refer to him as THE MAN when DOING MANLY HOT PINK HUSKY RAPTOR MAN-THINGS, and though he's not the leader, he's usually BRONSIDERED the best of the group when it comes to DRIVING MONSTER TRUCKS.

THE MAN wears the BRIGHTEST, BOLDEST COLOURS, and regularly practices his bellowing - and dyes his MIGHTY MANSTACHE. He was in fact not HATCHED THIS WAY, and likes to give motivational speeches about this subject. It often involves bizarre costumes, convoluted dance sequences with THE SQUAD, and above all, shameless plugs for his BROFFICIALLY MANLY MUSCLE BUILDIN' "NO WAY?!?" "YES WAY!!!" WHEY POWDER.

THE MAN believes most strongly in this POWERFUL POWER POWDER, the SPARKLY recipe of which was a secret MAN-HANDED to him by the MANCIENTS THEMSELVES. It's also a secret to everyone else; THE MAN, as much as he would love to give everyone free samples, can't help but chug the stuff as soon as he's made it, just to see if it'll make him EVEN MOAR MASCULINE THAN HE ALREADY IS. (It doesn't, of course - it's very difficult to be any moar masculine than a HOT PINK HUSKY RAPTOR!) ^Aaaaand this is by Ramiel!