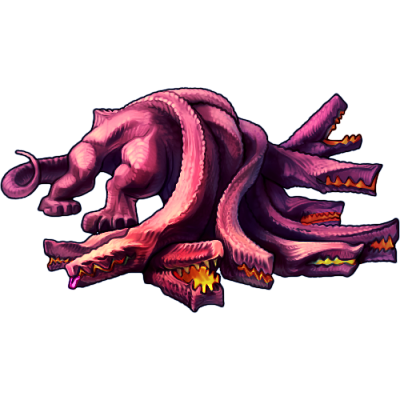 The amphisbaena (/ˌæmfɪsˈbiːnə/, plural: amphisbaenae) is a mythological, ant-eating serpent with a head at each end. The creature is alternately called the amphisbaina, amphisbene, amphisboena, amphisbona, amphista, amfivena, amphivena, or anphivena (the last two being feminine), and is also known as the "Mother of Ants". Its name comes from the Greek words amphis, meaning "both ways", and bainein, meaning "to go". According to Greek mythology, the amphisbaena was spawned from the blood that dripped from the Gorgon Medusa's head as Perseus flew over the Libyan Desert with it in his hand, after which Cato's army then encountered it along with other serpents on the march. Amphisbaena fed off of the corpses left behind. The amphisbaena has been referred to by various poets such as Nicander, John Milton, Alexander Pope, Percy Bysshe Shelley, Alfred, Lord Tennyson, A. E. Housman and Allen Mandelbaum; as a mythological and legendary creature, it has been referenced by Lucan, Pliny the Elder, Isidore of Seville, and Thomas Browne, the last of whom debunked its existence.