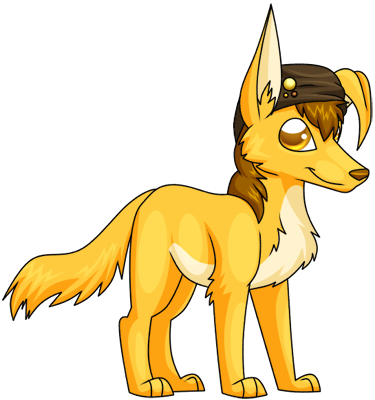 (Shifty art and character design by me)


There are two types of Amber that are very carefully created with the right combination of insects to manipulate their behavior. One is a canid designed to be attack dogs (either on the frontlines or to pick off weaker gems after a skirmish) and the other is a large mole/bear-like creature for excavating resources. Canid Ambers are feared on the battlefield for their sheer brutality, frenzied, quick attacks, and zero capacity for mercy. Any gem up against a canid Amber knows how to deal with them; get them before they get you. Once an Amber has her jaws on you, your chances of escaping unharmed go down to almost nothing.

This Amber was created with the wrong combination of insects, which created a completely different personality, her physical ear defect, and worst of all, independent thinking that made her nearly impossible to train. She was sent to Earth to fight for Homeworld despite failing every test put in front of her. They figured that their flop of an Amber would quickly be disposed of in the heat of battle.

What Homeworld didn't count on was her independent thinking kicking in, causing her to rebel against gems as a whole. She hated Homeworld for treating her like a disposable weapon, and she hated the Crystal Gems for attacking her assuming she was one of the more primal Ambers. She only found one group she didn't hate; humans. For years, Amber would relentlessly attack any gem that harmed humans, regardless of which side they were on. This rogue Amber went down in niche war history, and both sides eventually learned to be careful of the unpredictable creature.

Her gem is on her tongue and her weapon is a set of metal jaws that fit on her face. The gap in her teeth on the sides of her mouth is where the straps for her jaws go. Her tongue is extendable so she whips it around her face to summon her weapon.

Amber does have a human form, but since she was created with an animal one, her human form is cumbersome and difficult to use. It would take practice to learn how to use it.

Canid Ambers are based off the "real" crocotta, which are described as wolf or hyena-like. Ambers even have the bone ridge as teeth."