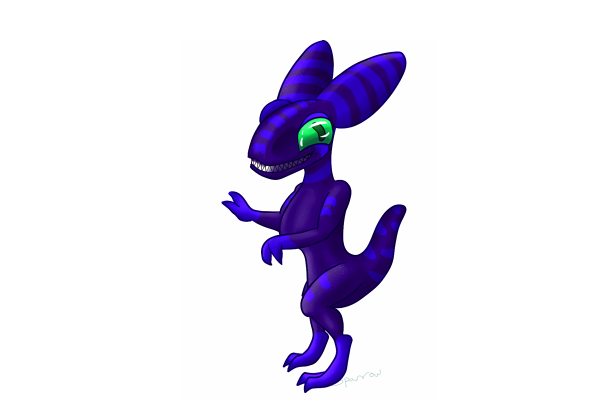 Carbon is a Oscuna and the mascot of the Oscuna Species, which is a closed species. However there is a MYO Event happening now where you can get one for free.
Some info on the Species can be found here, along with the event sparrowwrightheart.deviantart.…

::Some Species Info::
-They mimic the appearance of their prey.
-Once they mimic an appearance of a target, they can not transform back until the target has been consumed.
-They can unhinge their jaw.
-Being very rabbit like in appearance can make them nonthreatening, however that is a farce.
-If you are willing to take the STRONG risk of waking up to seeing yourself looming over you at your bedside, you can keep them as pets.
-They can paint themselves.
-They can be either gender, this is up to you.
-They can be killed, and this is the only way one will stop stalking its target.
-Ears are not flat like a rabbit, but cylindrical, like a can or football
-Major habitats are forests, but they will live anywhere substantially dark.
-Though they can come out in the sunlight, they prefer to have a different form for this.
-Because they are shapeshifter, they can be drawn as any species (Assuming you own the critter they turn into)
-Rumor has it when they're not stalking, they're pulling pranks and causing mischief.


Some info about Carbon:
-Loves to pull pranks and disassemble equipment.
-Hides items like cellphones and car keys.
-Watch your pets around him, or they may disappear.
-Same with children.
-Likes to hide in cardboard boxes and closets.
-Finds human reactions to its unhinged jaw or shrieking extremely funny.
-Breaks into houses through open windows, dog doors, vents, and unlocked doors.
-More likely to steal all the sugar he can before you wake up, rather then actually harm you.
-If you don't have any sugar its a different story.
-GO BUY SOME SUGAR!
-Can be held off its target if supplied with sugar or sugary foods.