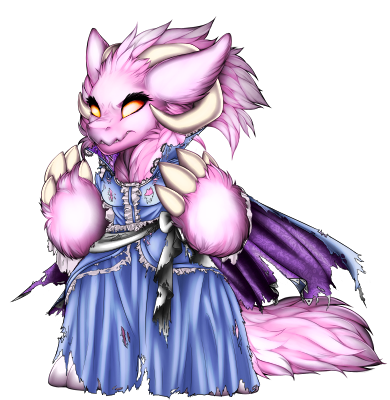 If you start seeing this villager on the front page a bunch I'm sorry, I just need to try and amass a few painties for her ;w;
I also apologize for the long-windedness of this bio, but I just really wanted to write a short story for her!

First off, I should make something clear: “Princess” is not this beast’s real name. No one but her, and her kin, knows what that might be. As for where her current name, and outfit, comes from… well, that can be summed up quite astutely.

For several weeks a group of human hunters had travelled around, and stalked, a settlement of Wickerbeasts (the one in which “Princess” was a part of) in the hopes of capturing one or two to sell for a huge profit. These were, of course, no ordinary hunters and, whilst the two species don’t usually get along at all, were only thinking of potentially lining their own pockets with the illegal sale of a live Wickerbeast. Clearly, this is just one of several incidents revolving around the black market and, by extension, illegal “contraband” that pays extremely well… if you’re comfortable with the risks involved.

Getting arrested really isn’t the only concern when you do a job like this.

After some time of skirting around the outside of the Wickerbeast settlement, the hunters eventually claimed their prize in the form of a very bright, pink and white, furred Wickerbeast. After quickly trapping and restraining it, a quick examination proved her to be a female which might see them all earn a significant increase in pay provided they find the right people; much better than just hacking off her tail and selling that.

Keeping her in a small cage, muzzled and restrained, the hunters set up camp a while away from the Wickerbeast settlement and planned their next moves. If they really did intend to sell her for even more money they needed to make her seem a little more appealing than a scruffy, furry beast, right? The hunters comprised of a mixture of humans from different walks of life, a couple of which were already decently well off due to their career choices, and the suggestion was made to “pretty her up a little”; a strange thing to want to do, but the intention was to make her as appealing as possible to potential buyers.

The group set about carefully tending to her as best they could, despite being rather clueless, and cleaned her up, brushed her fur and, the most unorthodox decision, forced her to wear an opulent gown and cloak “borrowed” from one of the hunters’ sisters, he could always just buy her a new one once this job pays off; chances are that whoever buys the beast will be fairly well off, and appealing to that demographic can really matter. This is also how she got the name “Princess” which, as uninspired as it is, was simple enough to work.

Still tied up in her cage, now wearing her fancy new dress (an item of clothing she despised almost as much as she did the humans that forced her to wear it, but unable to do anything about it), nightfall soon descended upon the camp as it had done for however many countless nights she had spent in the hunters’ “care”. As the group retired to their makeshift camp for the evening a rustling could be heard nearby, attracting the attention of the pink Wickerbeast. Cocking her head to one side, she saw a figure emerge from the brush and cautiously approach, constantly surveying the surrounding area, before reaching her cage. It was another human, although he was unfamiliar to her; she’d never seen him before but she certainly didn’t trust him at all… afterall, how could she? He tried talking to her but she had absolutely no idea what he was saying; she was from a secluded tribe, how could she when she’s never really met one up close before?
His face seemed rather… soft. Soft in the sense that he seemed pretty harmless, unlike the rest of the humans here. Where did he even come from? He doesn’t seem like he with the others, so how did he know she was even here? Not that it really matters; he began to make gestures towards the horizon, to her, and to the cage itself. Again, she had no idea what he was saying, but he quickly retrieved a funny looking object from his pocket and showed her it, causing her to reel back suddenly and scowl at him. He looked apologetic and continued pointing towards the lock on the cage, before quietly fumbling about with it. After a little while of messing with the lock and looking over his shoulder every so often, the mechanism made a quiet *click* before the human removed it and silently opened the door. He approached Princess in as disarming of a manner as he could and pointed at the lock keeping her chained to the cage, causing her to back away speculatively.

Eventually, the human had removed all the locks keeping her in place and coerced her to allow him to remove the muzzle, although it was against his better judgement as this particular Wickerbeast must really hate humans at this point…

Regardless, it was simple enough to unlock and he quickly slid the leather binders from around her maw before quickly stepping back to give her some room. Princess stepped out of the cage and stretched as best she could, the wind catching on her new gown as she did so; the skirt wrapping itself around her furred form as the dress' high collar incessantly flicked her in the face due to the strong breeze, very clearly irritating her to the point of wanting to tear the outfit to shreds there and then... she angrily yanked and pulled on various parts of the dress in an attempt to loosen it somewhat, but… there were more immediate concerns to take care of first; the dress can wait for now... besides, it might be more fun to have it ruined in her next little "argument" than simply tearing it asunder. The human was wildly gesturing towards the horizon again in a vain attempt to get her to flee but she was having none of it; she barged past the human, leaving him behind, and stormed towards the hunters’ temporary living quarters; her silken cloak billowing elegantly behind her.

Sneaking into the makeshift building, the human that helped her escape waited outside in the bushes, terrified of what was going to happen next. After a little while he heard what sounded like a rough scuffle and screaming, the sounds of fighting before… silence. Nothing more happened for what felt like an age, but yet the human still waited. Eventually, a figure emerged from the shelter: a bulky, furred being casually stepped outside and inhaled deeply before looking in the human’s direction, having picked up his scent. She began to approach him but in a manner that was calm and collected… quite the opposite of her appearance, as her muzzle and claws were covered in blood; specks of crimson spattered all over her face. Her elegant gown and cape now ripped and torn somewhat, very clearly from the debacle a moment ago, but she still made no effort to remove the article of clothing entirely; she merely let the wind do what it pleased with the tattered material. She continued to approach the frightened human before stopped partway, pointing at him.

Confused, he remained in his hiding spot, and continued to watch the Wickerbeast. Lowering her arm, she calmly gestured to herself and pointed towards the horizon in the distance before respectfully, but hesitantly, dipping her head towards the human. Reluctantly, the human stood up from his refuge and looked on at the pink furred beast and, after a moment of exchanging looks, he nodded back. He could’ve sworn the beast chuckled to herself, before turning away and running off into the night; cape still fluttering gracefully behind her, albeit with a little more damage now.

Perhaps she decided against destroying the garment to remind herself of the whole ordeal? Or perhaps she simply decided that she quite liked it, once it was torn and stained to her liking? Either way, it probably won’t last all too long, however, what with her newfound profession as a warrior, defending her new home from beasts, and other laborious careers.

Her outfit has already seen one bloody engagement, after all, so what’s the harm in having a few more…? In fact... it seems like the fighting is already taking its toll on her fancy cloak and gown~