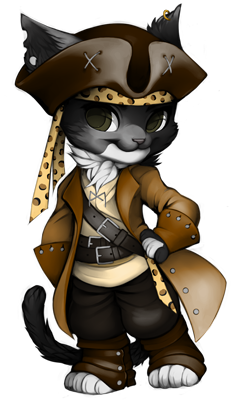 Likes: Sailing under Joshamee, Sword Fighting, and Drinking
Dislikes: Those who doubt his Captain, Marines
About:
Quartermaster and Swordsman of Joshamee's crew, he never planned on being a Pirate.
His father, Fleet Admiral of the Marines, had he and his sister, Dolly, raised in the ranks. Given no special treatment, they were pressured hard and worked even harder. They relied heavily on eachother for support during their training.
One day, a Pirate was caught and brought in. Curious, Ozkar snuck to the prison block and watched them for a bit. The pirate didn't seem so bad compared to the other criminals they've caught before. He walked over to the cell and began to talk to him, his name was Joshamee. Admiring the freedom Joshamee seemed to have, even behind bars, Ozkar decided to help him escape.
When they were almost outside they ran into his sister, she warned him of the trouble he'd get in if he went through with it. He convinced her to let them go, and got Joshamee outside. He was grateful and offered Ozkar a spot in his crew, but Ozkar had to decline. He would already be in enough trouble as it was and he wasn't going to run from his responsibility. Joshamee then left.
Ozkar was detained then brought before his father who was livid. He sent Ozkar to be tied up outside until further notice. Over the next few days Dolly would attempt to bring him food and water, but he wouldn't accept it. He would be interrogated for the pirate's location, but refused to say anything. Beaten and starving his condition started to deteriorate.
Then one day. in his near unconscious state, he felt someone begin to untie him. Through blurry vision he saw a familiar colored face, it was Joshamee. He had heard about Ozkar's refusal to turn him in and broke in to return the favor. Ozkar was then given the same offer, he truly couldn't refuse. Leaving his father and sister behind, he joined Joshamee's crew.
Paintie done by Odorokasu that's me~