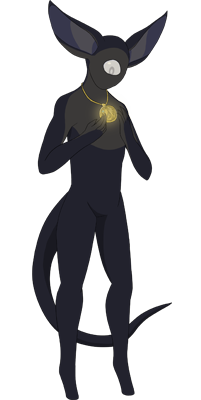 Zil is infected with Zombipathy. Eating brains relieves symptoms for a time, but comes with memories of the brain's former life. Your doctor recommends adding hot sauce for extra flavor, but a Golden Apple a day will send the Zombipathy away.

Art and character: By me


Bio:
Abducted at a young age by a Hunter, and was with another of xeir kind in the carriage xe were thrown into. The other helped xem escape, but did not follow. Zil fled, but was far from home, and was lost in the middle of nowhere. Xe found a house and tried to find shelter until they were spotted by the homeowner's son. The homeowner took Zil in when she saw xe were a child and xe stayed with the kind homeowner, forming a familial bond with the mother and son.

One morning, Zil had stumbled upon a shimmering golden pendant of sorts in the middle of the woods with an engraving of a feathered serpent and a blue gemstone where the serpent's eye would be. Xe thought someone lost it and was going to return home before the pendant spoke.

Other:
- Zil is mute, so xeir only form of communication is through expressions, sign language, and sometimes drawing or writing. Not only can xe not speak, but xe also can't make any sort of noise other than xeir breathing.
- Being made of shade/shadow, Zil does not need to consume anything to stay alive. All they rely on are wits, instinct, and possibly others.
- Xeir only internal organs are a brain, heart, and lungs.