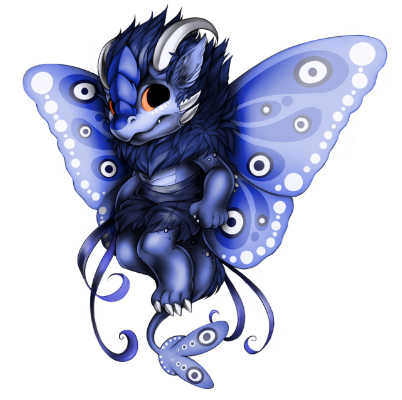 FAERIE DRAGON
A faerie dragon is a cat-sized dragon with butterfly wings. It wears a sharp-toothed grin and expresses its delight by the twitching of its tail, its merriment fading only if it is attacked.
Invisible Tricksters. The only warning of a faerie dragon’s presence is a stifled giggled. The dragon stays out of sight, watching invisibly as its victims contend with its pranks. When its fun is done, the dragon might reveal itself, depending on the disposition of its “prey.”
Friendly and Bright. A faerie dragon has a sharp mind, a fondness for treasure and company, and a puckish sense of humor. Travelers can play to a faerie dragon’s draconic nature by offering it “treasure” in the form of sweets, baked goods, and baubles in exchange for information or safe passage through its territory.
Languages Draconic, Sylvan
| Superior Invisibility | Limited Telepathy |
| Magic Resistance | Innate Spellcasting |
INDIGO FAERIE DRAGON can cast dancing lights, mage hand, major illusions, color spray, mirror images, suggestion, and hallucinatory terrain.
-- Dungeons & Dragons 5th Edition Monster Manuel

FAFNIR
INDIGO FAERIE DRAGON
Fafnir is a lively, good-natured faerie dragon who enjoys food (especially sweets and baked goods), music, and good company. His fellow villagers have given him all these things and more. His best friend is Flynn.
This tiny dragon enjoys exploring the outskirts of his village, keeping a keen eye out for animals to tame. When he's not doing his job, he is usually playing tricks on his fellow villagers. Never enough to cause actual damage to anything, but definitely enough to anger a short-tempered wickerbeast trying to repair a shield.
Aiex and Asha are the only ones who can understand what he says, being that they're the only ones who know Draconic as well as english.
While good-natured most of the time, Fafnir can be rather impish when he's bored. He can't help it, though. He'll try to take a nap in the garden, but messing with Alistar sounds so much more fun. Perhaps a little suggestion spell could convince Nikki to bake him something sweet.
Actions include Bite and Euphoria Breath.