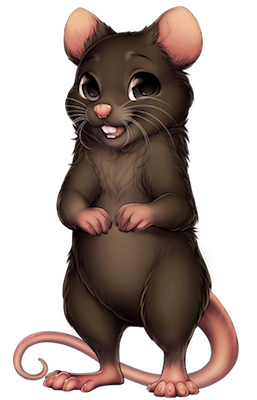 Plague is the fourth horseman... uh... horserat... wait, that's a ferret he's riding... oh bother, you know what I mean.

He's a terrifying warrior, mounted on his sleek mustelid steed. So what if he's only six inches high, size isn't everything! This is probably more effective if you imagine him saying, in a high ratty voice, "The plague! I'll give you the plaaaaague!" Ahem. Still playing with this pastel-and-linework style--this is a very silly little piece, done mostly because I was trying to find a good workable size that allowed me to get lots of grain that still showed up after JPGing. He's a plague fairy. He even has strap on wings. (Hey, somebody's gotta do it.) -- Ursula Vernon.