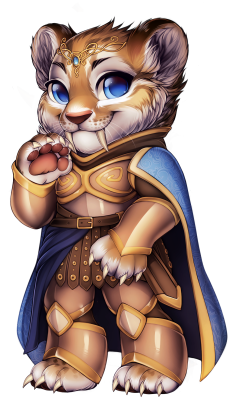 Yukumo is infected with Lycanthropy. Changes into a beastly monster after exposure to moonlight or especially frustrating board games. Howling at the moon relieves the symptoms for a little while, but use a Golden Apple for best results.

A former warrior, fallen far. Yukumo was defeated by a very powerful monster and held captive by it for a long time, until Urasina slew it and saved her. Strongly traumatized by her imprisonment, Yukumo is largely silent and moody, and has resolved never to battle again. She makes herself useful as the band's doctor and backup blacksmith.

Yukumo is grateful to Urasina for saving and freeing her, and sometimes there's a strange, longing look in her eyes when the warrior mare is fighting. She's not on the best of terms with Buck, Moofy, Kodama, Tybalt, and Faolan, but they accepted her as one of them and do support her when she needs it. Tatonka doesn't like Yukumo at all, saying her demeanor reminds him of bad memories, and this makes her sad. The only member of the band Yukumo will regularly talk to is Steppe, but she hasn't told the zebra why, though Plume has been able to break through the big cat's stoic shell and get her to smile and laugh with her dance moves.