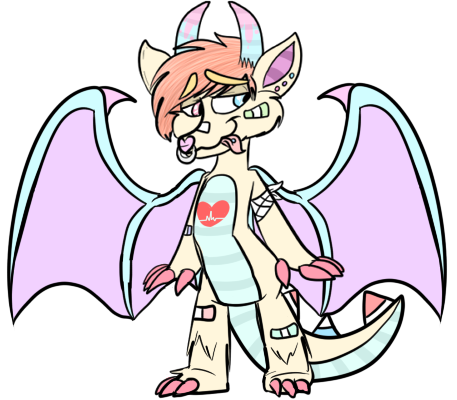 EXTRA: Placebo can breathe ice/frost, has telekinetic abilities, and prefers to be in solitude unless they are needed.
They can hover with their wings, hypnotize lost and weary people/animals into letting them help nurse them, and are skilled at flying.

BIO: Placebo is a medical dragon-- a type of dragon + wolf hybrid that specializes in helping hikers of large mountains heal and recover from injuries or altitude sickness.
Placebo is a small dragon: height is about 6'5 and weighs around 215 lbs. Wingspan averages around 10-15 ft.
Strawberry colored hair, pale yellow short fur, leather-like light blue and lavender wings with pink horns at the end joints, claws are a deep reddish-magenta. They have a heart shaped nose with a silver septum piercing, medium sized ears with three earrings (blue, pink and black) and large pointed upwards light blue horns which appear to be dripping pink slime. They have a pale blue underbelly with a light red cross on their chest.
They have a large tail with 5 pill capsules/spikes. Each spike holds 50 placebo pills. Their body is also covered in multiple bandages and they have gauze wrapped around their arm to signify superiority and leadership.
They tend to act as a medic of some sorts. They'll help nurse injured animals/humans to perfect health and will feed them sugary pills that they produce via the spikes on their tail.
They make their home at the peaks of Mount Everest, Mount Olympus, Mount Vesuvius, The Appalachians and small mountainous landscapes.