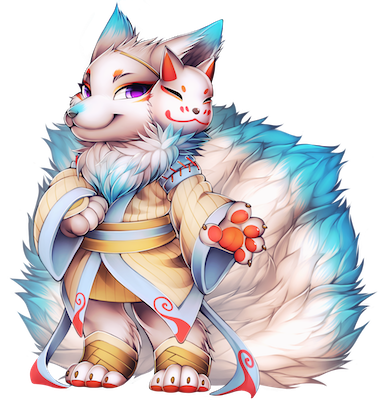 Kitsune are from Japanese folklore and are Japanese foxes. A kitsune can have up to nine tails, depending on its age, wisdom and power. The only way to kill a kitsune is to cut off all of its tails, as it is said that one of the tails is its main tail and the source of all its power. Not knowing which tail is the main one, one would have to cut off all its tails to kill it.One, five, seven, and nine tails are the most common numbers in folk stories. When a kitsune gains its ninth tail, its fur becomes white or gold.

A kitsune is a shapeshifter, and usually when it reaches the age of 100 years, it learn the ability to take on a human form. Thus, they have to be a fox for a hundred years before it can shapeshift from a fox to a human and back again. It is also said that a kitsune can duplicate other human beings, in other words shapeshift into the look-a-likes of different people.

Kitsune can be either male or female, and usually take the form of young Japanese girls, beautiful women and older men.

Kitsune are believed to possess superior intelligence, long life, and magical powers. They are a type of spiritual entity, and the word kitsune is often translated as fox spirit. However, this does not mean that kitsune are ghosts, nor that they are fundamentally different from regular foxes. Because the word spirit is used to reflect a state of knowledge or enlightenment, all long-lived foxes gain supernatural abilities.

There are two common classifications of kitsune. The zenko (善狐, literally good foxes) are benevolent, celestial foxes associated with the god Inari; they are sometimes simply called Inari foxes. On the other hand, the yako (野狐, literally field foxes, also called nogitsune) tend to be mischievous or even malicious. Local traditions add further types. For example, a ninko is an invisible fox spirit that human beings can only perceive when it posseses them. Another tradition classifies kitsune into one of thirteen types defined by which supernatural abilities the kitsune possesses.

Physically, kitsune are noted for having as many as nine tails. These kyūbi no kitsune (九尾の狐, nine-tailed foxes) gain the abilities to see and hear anything happening anywhere in the world. Other tales attribute them infinite wisdom (Omniscence).

There are thirteen different kinds of Kitsune, each with a corresponding element, listed as follows: Heaven (or Celestial or Prime), Void (or Dark), Wind, Spirit, Fire, Earth, River, Ocean, Mountain, Forest, Thunder, Time and Sound. One of the most important things to a Kitsune is freedom. They do not fare well to being locked away, and do not like to be forced to do something they don't want to. Doing something like that would be likely to get you killed if they are freed. Kitsune love playing tricks. They like to take things and hide them from people, or do just about anything else to piss someone off.

Kitsunes' have things called Kitsune balls, or star balls, which is a small white-gold ball that is a Kitsune's most prized Kitsune - Mythical Creatures Guidepossession, since it is almost like their life force in a ball. If you get your hands on a Kitsune's star ball, you would have the ability to control the Kitsune, and make it do your bidding. However, Kitsune hate being stripped of their freedom, and when the Kitsune gets its star ball back, there will be serious repercussions for you to deal with. In some stories, kitsune have difficulty hiding their tails when they take human form; looking for the tail, perhaps when the fox gets drunk or careless, is a common method of discerning the creature's true nature. Variants on the theme have the kitsune retain other foxlike traits, such as a coating of fine hair, a fox-shaped shadow, or a reflection that shows its true form. Kitsune-gao or fox-faced refers to human females who have a narrow face with close-set eyes, thin eyebrows, and high cheekbones. Traditionally, this facial structure is considered attractive, and some tales ascribe it to foxes in human form. Kitsune have a fear and hatred of dogs even while in human form, and some become so rattled by the presence of dogs that they revert to the shape of a fox and flee. A particularly devout individual may be able to see through a fox's disguise automatically.

One folk story illustrating these imperfections in the kitsune's human shape concerns Koan, a historical person credited with wisdom and magical powers of divination. According to the story, he was staying at the home of one of his devotees when he scalded his foot entering a bath because the water had been drawn too hot. Then, "in his pain, he ran out of the bathroom naked. When the people of the household saw him, they were astonished to see that Koan had fur covering much of his body, along with a fox's tail. Then Koan transformed in front of them, becoming an elderly fox and running away."

Other supernatural abilities commonly attributed to the kitsune include possession, mouths or tails that generate fire or lightning (known as kitsune-bi; literally, fox-fire), willful manifestation in the dreams of others, flight, invisibility, and the creation of illusions so elaborate as to be almost indistinguishable from reality. Some tales speak of kitsune with even greater powers, able to bend time and space, drive people mad, or take fantastic shapes such as a tree of incredible height or a second moon in the sky. 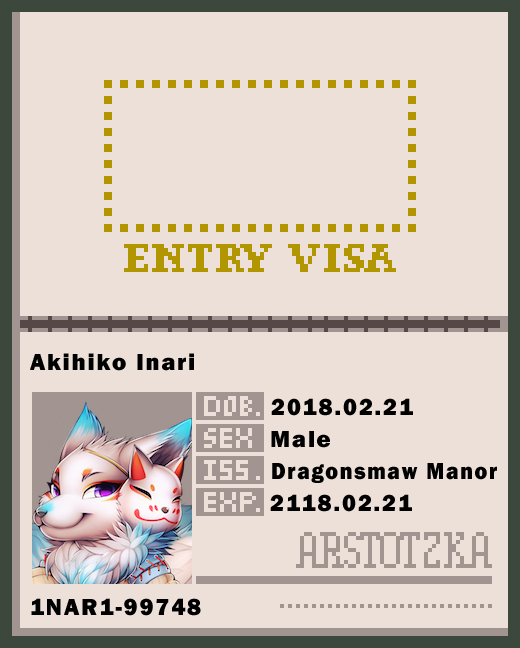