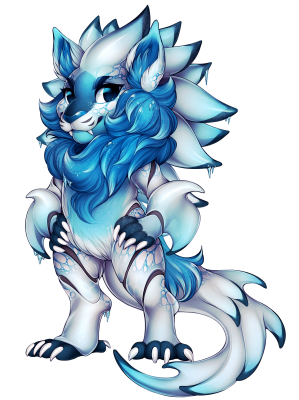 Keoki is a silent, growling kinda guy who tends to shoo people away and grumble when small talk comes up. However, around the manokit Hawaki, he's much kinder and although he barely speaks even in her presence, it's rumored that he actually smiles! The two quickly became friends when she saw him constantly walking past her folk's restaurant and taking side glances into the windows and offering him a free meal! Turns out Keoki wasn't the best at keeping a job due to his sourly attitude so he couldn't really afford to splurge on food. Now he's Hawaki's official "body-gaurd"; he'd watch out for her and made sure she didn't trip on anything, and she would repay him with yummy food!

The two have grown very close from working together for so long and Keoki even helps out with some of the tasks in the kitchen, like washing the veggies or taking things out of the oven. He doesn't need to constantly help her but... could it be that he actually enjoys her company? ',:3c