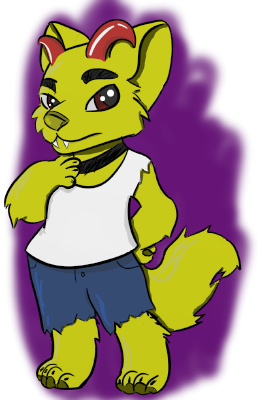 Satand no longer has a house! They will be unable to work. Please replace the house or move Satand into a FC slot.

Satand is the evilest being in all of the land and should be avoided at all costs.
He loves to troll people on the internet, and likes to troll Jesterus and Eli the most of all. He ended up tracking them down and pranks them in real life. He says that he hates them... but in reality he is actually jealous of Eli.
Back in his Highschool days, Satand was a good kid. He got all A's and never got into fights. He had a crush on a blue fox with long, curly, brown hair and a weak goatee. His name was Jesterus. Satand loved him, though he had never talked to him.
One day, Satand somehow was brave enough to talk to Jesterus. Satand revealed his crush. Jesterus kindly rejected him, as he had just started dating his now-husband, Eli. This was enough to snap Satand. He left school that day and ripped off the sleeves of his plain white t-shirt and cut his jeans to turn them into shorts. He quit school forever.
He resorted to a life of crime...... if you consider trolling people on the internet a crime. He spent almost all day everyday trolling people on forums, Mewtube comments, and Facebork.
After many years of trolling people on the internet, he found someone on Facebork commenting on a minion meme. It was a person he hadn't seen or spoken to since that day in highschool. It was Jesterus! He automatically started trolling him, commenting that minions suck, to try and get revenge. He clicked on Jesterus's profile and saw that he had just been married,... to the dumb raccoon that stole his man! He started tracking them down, and found where they lived. He pulled pranks on them everyday for the rest of their lives, not knowing that some fucker was writing a book about their lives.
THE END
(if you would like to know how these characters came about, please contact Mary, Jesterus's secretary.)
((All comments made by this character are in character!!))
(((It's a joke!! please don't take offence to any of this, as i mean no harm to anyone)))