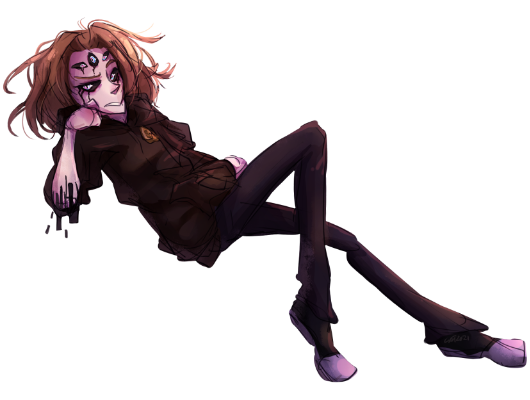 Since this Villager is me inserting myself into the world of Furvilla, you'll find that it's going to semi-permanently appear as the active villager for my account when I’m not showcasing another character or paintie. This villager will always be an active worker on my account as well.

!! ALL COMMENTS FROM THIS VILLAGER ARE SPOKEN FROM THE POV OF THE PERSON BEHIND THE COMPUTER SCREEN. !!

Fh's "Humanoid" form as visible in my avatar. Ink drips from its five eyes. Here, it has manifested the wings and claws from its second form, though in this state its wings are fully repaired and functional rather than tattered and mangled.

This villager doubles as a villager for both my persona and my IRL self. Because of this, the bio is going to be split into two sections. The first covers the details of the persona, the latter will be the details about yours truly. I can't guarantee a quality description of either, and I have no idea how long or short the sections will be.

A spirit of extreme malice born from the destruction of an object that bore sentimental significance to its host. Originally, FH was a pyramid-shaped paperweight, made of acrylic resin and filled with multicoloured beads that floated in a clear liquid. It was purchased by its owner when he was a small child in the year 1993, and was the first item that the boy had ever bought with his own money. He loved and cherished that resin pyramid, often looking into it and shaking the coloured beads around. It brought him great comfort and he’d kept it safe it for several years, even through various moves around the country. One would even daresay that it was his favourite item out of all of his possessions.

However, late into his adult life, a careless family member had knocked the pyramid off the shelf where it was displayed not once, but twice, shattering it. The man was devastated, as the pyramid was no longer a common item and could not be easily replaced. Even if it could, a replacement would not have soothed his upset as a new one would not carry the same sentimental significance that the first had. All of the time spent in his collection, all of the memories attached to it, those could not be passed on. He tried to repair the object, to no avail, and in the end it had to be disposed of.

After it was tossed out, carrying the intense feelings of grief and bitterness from its owner with it, the shattered pyramid manifested a malevolent spirit for itself and took on a form of its own. The once-clear liquid that held the colourful beads turned black, seeping out into the air and swirling violently around the shattered item, keeping the resin casing fragments and colourful beads in close proximity. If the pieces and beads drifted too far apart, the spirit would not be able to survive.

Now, it protects itself by manifesting tangible clothing to hide in, and it takes on a varying humanoid shape no matter which form is active at the time. Originally, there was only one form - an object head that mimicked its owner’s interests at the time of its shattering. However, as the spirit continued to exist and grow stronger, it began to shift and evolve into new, more dangerous forms of its own choosing. Some more human than others. Due to its shattered core, the spirit can never perfectly resemble a human. No matter how close it comes, there will always be some sort of glitch or imperfection in the appearance. That glitch is different for each form.

Its destruction was not the fault of the man who owned it; the malevolent spirit acknowledged the years of love and adoration that the man put into the object, and it felt the man's deep grief when he mourned the loss of the cherished pyramid. Despite this, the spirit sees everyone as an enemy, including him, and exists solely to lash out at or hurt anyone or anything it can get its claws on. The spirit is extremely violent, unpredictable, and relentless; once it has set its sights on a target, it won’t stop until that target is completely destroyed. It knows no alliances or friendships, and it has no hesitation or remorse.

The Fragmented Heart has taken up the position of Cook for the troupe of villagers under its watchful gaze, as well as a side interest in breeding minipets every week. It favors simple recipes like soup due to quick cooking time, but if it's not feeling lazy and ingredients are available, it might put forth the effort to make something fancier. Though it can eat its own food, it can't exactly taste anything so it relies on the others to determine whether or not the food tastes good. Luckily, the general feedback has been positive.

"But if it doesn't have a mouth, how does it eat?" you ask. According to one witness, the Fragmented Heart was seen dumping a bowl of freshly made soup and a Baked Furlaska into the neck of its hoodie, wherein the food disappeared and was never seen again.

Don't let it near your Phoenix Fire Hot Wings.
It will eat them all while staring you square in the eye.
It will show no remorse.

Holla holla, I got a dolla don't fucking know what I'm doing with this section right now. Check back later… //yeets myself into the sun