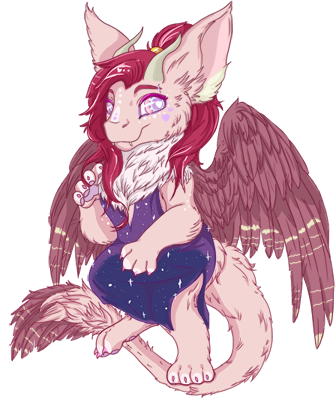 All comments by Giselle are in-character.
I can always count on my friends to protect me!
Darling sister you should know I'm stronger than I look!
What did you say your name was?

The plucky younger sister of the tavern owner, Giselle is disarmingly charming and often the talk of the town because of it. Despite her flirtatiousness, there's still something juvenile and naive about her. She enjoys making others happy, and considers the humble life of serving drinks and chiming in on customers' conversations to be sort of her calling. She's also a talented lyre player, and her singing voice is as sweet and melodic as the gentle notes plucked out on the lyre's strings. Could everyone remain as youthful and jovial as Giselle, oblivious to the ways of the world, this would be a much happier kingdom.

Giselle was always an idyllic and simplistic child, sheltered from everything by her older sister, who raised her in lieu of their parents. She had dreams of grandeur when she was young, dreams that a handsome princewould sweep her off her feet and wisk her away into the castle to live in the lap of luxury. (It could be any prince, although she often imagined it was Aurelian or Sarkan, the handsome wickerbeasts who were probably the closest to her age at the time although they didn't live in the castle). Although those childish dreams have since faded, Giselle still idolizes the royal family and enjoys hearing gossip about the kingdom. Despite her extroversion and good humor (or perhaps because of them), Giselle is rarely taken seriously by others, though she is the subject of many a crush.

Tavern-goers are encouraged to keep their banter with Giselle lighthearted, or risk the wrath of her sister.