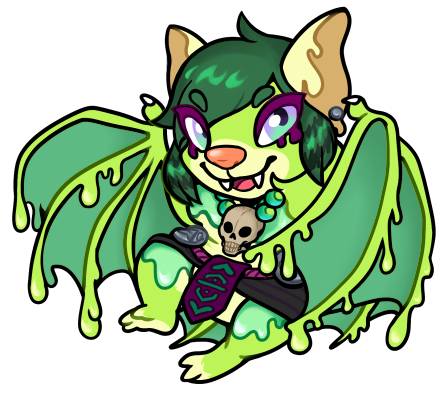 SLIME is infected with Lycanthropy. Changes into a beastly monster after exposure to moonlight or especially frustrating board games. Howling at the moon relieves the symptoms for a little while, but use a Golden Apple for best results.

Slime is an odd scholar who hunts down the beasts surrounding Dragonsmaw Manor. They previously studied alchemy, but as their research grew more focused on the monsters of Furvilla, they decided to suit up and become a warrior to get to know them more intimately.

Though they never graduated, Slime studied alchemy back when they lived in Quetzal Palace. Back then, they were much more quiet and reclusive... but classmates say they were always a little suspicious of their "extracurricular" activities.

After relocating to Dragonsmaw Manor, a village full of similarly sinister-seeming townsfolk, Slime expanded their studies into the monsters of Furvilla. Late into the night, you can smell them brewing up mysterious concoctions for usage in battle. It is rumored that Slime tries to interact with these creatures in other ways besides battle, studying their every move and writing who knows what in their spellbook...