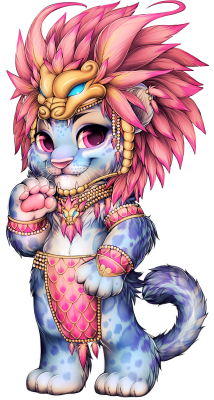 A young exotic dancer from Quetzal Palace, Plume trained for most of her youth, hoping to be chosen to perform at the annual Serpent's Festival Gala. But she was never chosen. Finally, unable to take repeated rejections, she fled her home and wound up in Olde Foxbury, where she crossed paths with Steppe and Moofy. The two equines brought Plume to Urasina, who welcomed her into the growing band.

Plume still loves to dance, and her graceful moves always get attention. She's gotten over her many rejections and is usually cheerful and helpful. When she's not dancing or mixing potions, she hangs out with Steppe and Moofy, helping them with their own careers. She also hangs out with Urasina when the warrior mare is not out defending the town, and the big cat considers herself to be the mare's "Number 1 Fan." She ALSO hangs out with Tybalt, and the Unicorn is trying to learn how to dance, with hilarious results. Plume has actually out-pranked Faolan, who now sees her as his friendly rival in playing tricks. The big cat uses her dance moves to help cheer up Tatonka when he gets into a slump. Plume's dancing is also capable of getting the stoic Yukumo to smile, and even laugh sometimes, and now that Kodama has joined the band, Buck can finally see her dancing as well.