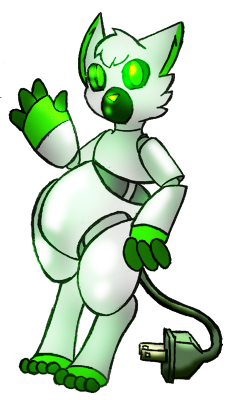 Binary | Agender | Robotic Cat
Who said robots don't feel? I feel more than you could ever know.

Personality
Binary is a robotic cat with a penchant for mischief. They enjoy messing with others' technology, and will do anything in their power to annoy others. However, they do have a soft side that they do not show often; they hate to be called emotionless or robotic, as they are very self-aware even by AI standards.
Background
It's not alive, stupid. Don't even try to fool me like that.

Screens flickered to life as the metal being woke up, green lights darting around as they scanned the surroundings. Metal hands pushed down on the ground as they stood, staring at the humans in front of them. One, shorter then the other, backed away, reaching for a button and hitting the wrong one. A glass wall lifted, the metal creature gazed at the two as it took a step forward, then another, sparks emitting from a plug-like tail.

The creature, instead of attacking the humans, turned to the door of the lab, toward the sunlight. The screens reflected the light, flickering more brightly to remain visible through the glare. They stepped out of the room before running away, leaving the humans behind.