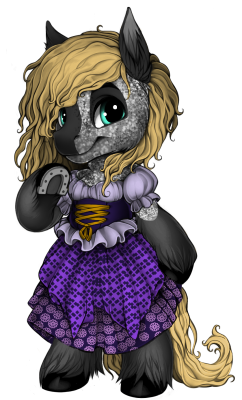 Personality
Spunky//Talkative//Naive//Book-Lover
Brynne is a more recent transplant to the community, coming to Brightfortune's neighborhood in search of work as a cook. She was quickly hired at the newly established Moonflower pub by Riley and Danny after tasting her delicious cheesecake recipe. This gangly mare claims she never quite fit in in her family of draft horses; not wanting to mess with blacksmithing, warrior training or other heavy work. Her talent was in cooking and whipping up fabulous deserts, and when it became clear to Brynne that she couldn't pursue that at home she moved on. This chatty mare delights in reading and hearing tales of adventure though, and it was while listening to one of the warrior Haldana's battles that she started falling for the brave sabertooth. After a good deal of casual flirting, Brynne finally asked her out on a date and they've been together ever since.

Build: Tall but a bit lanky and angular.

Appearance: Brynne usually can be found in a neatly kept dress and bodice, though her wild curly mane and tail are often a hopeless and beautiful mess.