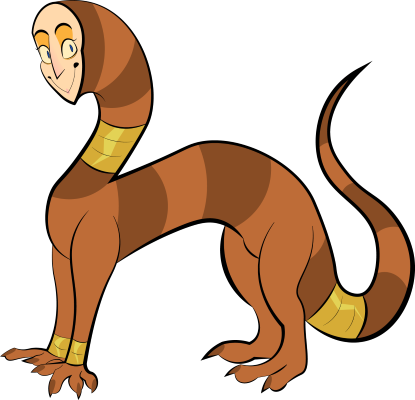 Arcturus, a strange reptilian beast with a human face, was once a powerful ancient diety. However, he's gotten forgetful and silly with age. Now he's just like your fun-loving grandpa. If your grandpa was 14 feet tall (from the top of his head to the bottom of his front foot) and 28 feet long (from his chest to the tip of his tail.)
He lives in a mystical cave on top of a mountain. There people gather to give him gifts to earn his wisdom, but because of his now goofy nature, he doesn't ever really know what to say. Sometimes, his loyal scribes are able to find just the right thing to say out of one of his old journals he wrote before he became forgetful. Other times, he's forced to say something random and hope it sounds alright. Luckily for him, no one questions his credibility and so even if he says something completely stupid his worshippers are still satisfied with the response...