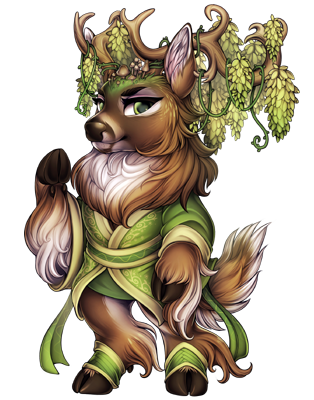 A tree spirit of some kind, nobody knows much about Kodama. He appeared before Buck one day and said he was the Saggitari's "new eyes." When the two are within a certain distance of each other, Buck can actually see what Kodama sees. The two are rarely ever apart due to this.

Kodama is magical and mysterious. No one in the band can really figure him out, though they've accepted him as one of them. Being a tailor really doesn't do much for anyone, but the tree spirit can turn a nice profit from his work. As always, Urasina protects him, despite some unease, and that unease is shared by Tatonka and Yukumo. Steppe, Plume, Moofy, and Tybalt find him fascinating, but Faolan isn't too fond of him, largely because Kodama's presence makes it that much harder to pull pranks on Buck.