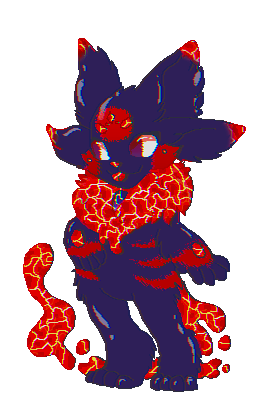 --Younger brother to Heir Andromeda, older brother to Princess Cassiopeia
--Lived in a kingdom on an island west of Oceandome, set to be the next heir to the royal family throne
--His parents were loving to family and kingdom alike, but were blind to his ambitions
--He was not a good son
--Easily swayed by the corrupt advisors
--Rude to the peasants that passed him on the street, dare crossing into his space
--Gave the growing revolution a reason to tear down the kingdom and kill the royal family
--Fled with his parents and a few guards, leaving his sisters behind
--They were caught by the revolution
--A stray arrow
--Screaming
--Crying
--His heart was bleeding
--They left him to die and gave chase to his parents who ran without even saying goodbye
--He thought he was going to die

He owned a magic pendant. As the next ruler of his kingdom, it was given to him. It was pitch black and circular in shape, the pendant of the New Moon. He did not know what it did. But in his time of need, he placed it over his wound. A final act of desperation. The pendant cracked and bled. But it stayed over the wound. It kept him alive, but just barely.

He is now nothing more than a wondering ghost.