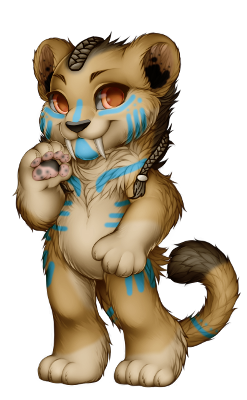 A warlike Sabercat, Roshani is half Smilodon and half Cave Lion. His tribal markings are made with crushed saffron crocus flowers boiled in water. The dye has long since sunk into his fur, leaving permanent teal stains. Roshani relies on being able to intimidate for most of his interactions, but don't be fooled. Each threat he makes, he can back up. All that being said, Roshani has a hidden tender side, and he typically tries to use his strength for good, even though his notoriously short temper often gets in the way. Beyond that, he hails from a Clan of warrior cats far to the South. His tribe was known for their swiftness and effectiveness in battle, before they fell, their lands swallowed up by a large wave.