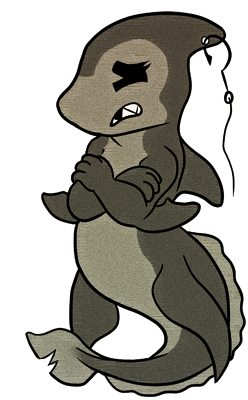 Edin was, when living, a young lady who enjoyed fishing. Everyday she'd wake up at dawn and would sell the majority of her catch to spread joy to those who bought the fish, rather than trying to make a profit. Those who knew her would always say how generous and kind she was, "Oh, that Edin? Why she's always a joy to visit!" However there came a day where that generosity turned to greed. Soon, rather than fishing to help others, she decided only to sell to those who'd pay her well. Those who knew her wondered where the kind and giving lady went, as it seemed she was gone; and her name became synonymous with greed for the locals. Of course, one tragic day it went downhill. One of the days Edin went fishing, she heard a rumor from someone that there was a fish with scales of pure gold. Filled with nothing but greed for the fish she went mad, not heeding the many cries of warning from the people she once cared about, and it was too late; the boat was swallowed whole by the golden scaled fish and Edin was killed. Doomed to an afterlife of suffering, she now wanders around local fishing docs, warning those who choose the path of greed and drowning those who fail to heed said warnings.