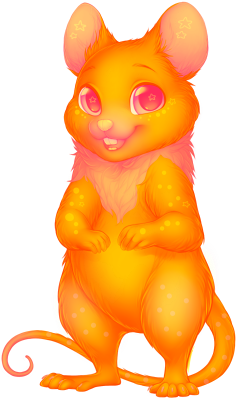 A bundle of energy with the powers of fire and lightning! Sparks is a cheery fellow who practically glows with enthusiasm-literally! He's quick and agile and always up for a game of tag, but he doesn't always play fair, opting out to use his powers to enhance his speed rather than be a good sport. Sparks is still working on controlling his powers, and can be a bit unpredictable in battle. The last scrap he was in led to everything being set on fire, so it was a bit hectic to say the least. However, whatever mistakes Spark does make never put a damper on his confidence, and they've never missed a beat when training! So far, their most powerful attack is launching flaming lighting bolts of orange and yellow through his tail, which acts as a conductor, but who knows what he may be capable of as he grows?