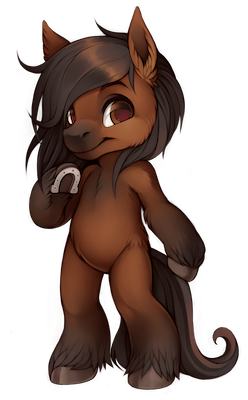 Ashley is a free-spirited explorer with a heart of gold... Well, not quite gold. Copper? (If you get that reference, I love you. #BJHM) She can be a tad mischievous at times, and has a certain level of skill for conducting business. Though she tries to be kind in her dealings, she often swindles people, buying goods for less than they are worth and selling them for much more. Ashley uses her charming personality to convince her friends to give her items for free or low cost, then turns around and sells them. However, don't take it personal; it's just business!

This demigirl is actually coping with a broken heart, and not the kind you get from an ended love affair. As a young filly, she was abandoned by her parents and never knew why. Mixed up between the realms of imagination and memory are shards of dialogue that stab at her heart, citing disinterest and the possibility of illegitimacy as reasons she was given away - but in her heart of hearts, she hopes it was a mistake, or a choice they made to give her a better life, like she sees on TV.

Ashley attends a church run by a black footed ferret named Miguel. Though his beliefs are somewhat unconventional, his unwavering faith and kind demeanor keep her coming every week. He has helped her through a great deal of an emotional trauma and encourages her to seek therapy, though she resists, saying their weekly meetings are enough.

She has a rivalry with a cotton candy colored feline called Pixie Stick, finding her to be snuck up and psychotic. Her rival describes Ashley as treacherous and unfaithful to the church. The mare suspects the source of tension between them (which she does not believe originated with her) comes from Pixie's crush on the church leader, Miguel.