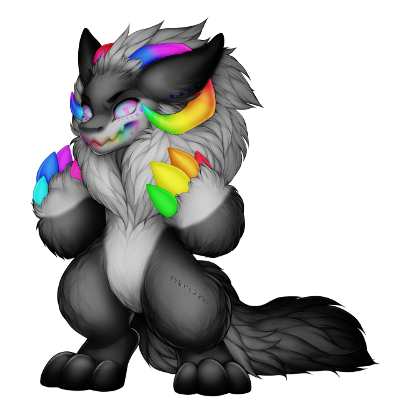 A massive fluffball of a Wickerbeast, Vomit is occasionally made fun of for his gross sounding name. However, he tries his best not to let it bother him. He's a true gentle giant, wanting nothing more than to care for and defend those he cares about, and doing his best to not seem frightening, especially to smaller creatures. He is a black and white Wickerbeast with rainbow colored vomit-like fluid constantly leaking from his mouth and a cut seam in his left thigh. This fluid is not vomit, rather, it's a pure liquidized form of his soul, which overflows constantly from his oversized, loving heart.