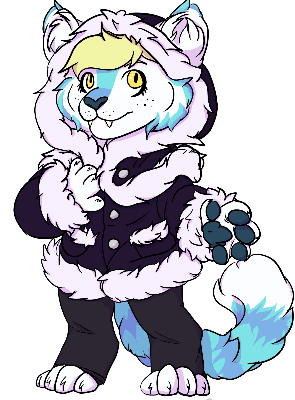 Profile is a WIP!
CSS base by TropicalDeer

A native of Tiger Eye Peak, Kariah loves everything wintery. When she was you get, you could usually find her outdoors building snowtigers, ice skating, or having snowball fights with friends.
However, as usually happens, as she got older she began to wonder what the rest of the world was like, setting out from home as soon as she turned 18.
After two years of hopping from town to town, swimming with the seafolk of Oceandome, picking up lute lessons from a bard in Olde Foxbury, and sketching all colors of birbs on the outskirts of Quetzal Palace, she happened across Dragonsmaw Manor. The place didn't necessarily pique her interest (much to dark and spooky, she'd say), but tripping over a pot plant and breaking a leg tends to cause one to stay.
After being happened across by Juice, she stayed with her past recovery and now lives in the neighborhood permanently.
Kariah often gets homesick, and still doesn't particularly love the Manor, but her attachment to her friends has her making the best of things. At least the outskirts have plenty of places to explore, right?

Kariah can be typically described like a mug of hot cocoa: warm and sweet. She's an outspoken extrovert who loves to go out with friends and adventure around local shopping districts to find her next favorite thing.
When she isn't in town though, one could guarantee she's out in the wilds exploring, rooting through old abandoned shacks and twisting dirt roads that haven't seen a soul pass through in years. Out here, she proves to be a mix of brave and foolhardy, often thinking she's plenty agile enough to scale a rocky cliff or tiptoe her way up a crumbling staircase, leading to a good number of scrapes and bruises.

- Being alone for very long