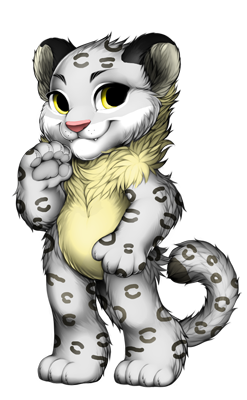 ART BY A KIND ANON

Namesake: Named after my Webkinz Signature Snow Leopard, as well as being named after Akira Fudo from Devilman Crybaby.

Personality: Big eater, empathetic and easy to anger or cause sadness to

Akira Fudo is a 16 year old Snow Leopard that has an odd power. However, the power cannot show itself. He is a big eater as he uses food to reserve energy. He can run incredibly fast, but has one thing. He is bullied and called a "crybaby" as he cries easily at one's suffering. However, this shows he cares about a person and is willing to try and be friends with them.